A marvel of Victorian engineering that saw its last train almost 50 years ago has been given a new lease of life as Britain’s longest cycling tunnel.


The Combe Down Tunnel is a key section of the Two Tunnels Greenway, a four-mile stretch of disused railway between Bath and the village of Midford in Somerset. It forms part of a longer cycling loop that takes in other striking engineering accomplishments, including the already reopened but shorter Devonshire Tunnel, the Dundas Aqueduct and Tucking Mill Viaduct.

The Combe Down Tunnel has taken five years to complete, at a cost of £4.2m. It will be officially opened by cycling charity Sustrans, who have led the restoration project in partnership with Bath & North East Somerset Council, on 6 April 2013.

Jon Usher, Sustrans Area Manager for West of England, said their work on the project started back in 2007, when the organisation was spurred on by local community organisation Two Tunnels Group to secure Big Lottery Fund cash for the restoration.

“In all fairness to the tunnels and to the Victorian engineering they were in remarkably good condition considering they’d been left for 40 years or more since the Somerset and Dorset Joint Railway was closed,” he said.

The restoration included clearing out the in-filled tunnel entrances, laying the tar path, target repointing on some brickwork and clearing “100 years of accumulated soot”.

The launch date marks 50 years since the Beeching report condemned thousand of miles of UK railway to dereliction. To date, Sustrans claim they have resurrected 1,500 miles of disused lines as cycle and pedestrian paths around the country.

To celebrate the tunnel’s opening on 6 April there will be a festival at Bloomfield Road Open Space. From 12.30-4pm there will be a 13-mile family bike ride on the loop through the Combe Down and Devonshire tunnels, and along the Tucking Mill Viaduct and Dundas Aqueduct. Sustrans will be taking donations of £5 from individuals and £10 from families. 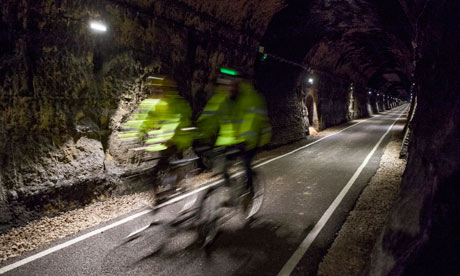 Engineers cycle through Combe Down tunnel, part of the Sustrans Two Tunnels Greenway project near Bath, which opens on 6 April. It is said to be the longest purpose-built cycling tunnel in the UK. Photograph: Sam Frost


In the age of steam this mile-long tunnel was notorious among train crews: a place of choking smoke and red-hot flying cinders. Next month, a gentler, less hazardous stage in the varied history of the Combe Down tunnel in Bath begins when it opens for much cleaner modes of transport.

Billed as the longest purpose-built cycling tunnel in the UK, the Two Tunnels path will be open for fans of pedal power along with hikers and train enthusiasts. The more energetic can follow a 13-mile loop taking in another reopened tunnel, the Devonshire, and a refurbished viaduct. But the idea is that the route will also be used daily by local people as part of their exercise regime, dog-walking routines or simply when they go to the shops or to work.

"We can't wait for it to open," said Frank Tompson, a keen cyclist and the chair of the Two Tunnels community group. "It's been a long, hard journey to get here but we believe it's going to be fantastic. We've already had messages from people all over the world – the US, France, Indonesia – who are planning to come."

In advance of a grand opening on 6 April, the Guardian was given a sneak preview of the tunnel on the day the lights were turned on for the first time. We did not cycle all the way – that honour goes to people who will donate money for the tunnel's upkeep – but saw enough to know it will be a memorable experience.

The tunnel curves at both ends but at the centre there is a straight stretch of about 1,000 metres. Lights are seven metres apart but the crown remains dark for the sake of the bats, creating a calming, even hypnotic, effect. There are still furrows on the roof created by years of steam condensing just above the funnel.

Most the tunnel is built out of Staffordshire blue brick, though in places where the craggy limestone was sound the Victorian engineers left it in place. The worst of the soot lower down on the walls has been scraped off.

The project began seven years ago over a few drinks in a Bath pub when Tompson and a few friends wondered why they couldn't get the tunnels re-opened to create a route heading south from the city centre towards the Mendips. They met officials from Sustrans, the charity that aims to get more people on bicycles, foot or public transport, and Bath and North East Somerset council.

The following year Sustrans was awarded £50m from the Big Lottery Fund for its Connect2 project to improve sustainable transport links and put £1m aside for the Two Tunnels project. Tomson's community group received £200,000 from the sale of more than 100 life-sized model pigs that were displayed around Bath in summer 2008, while the council chipped in £400,000.

There were problems. As well as the engineering challenges, new homes had to be found for the protected bats – and snakes. There were delicate negotiations with landowners along the route including the actor Nicolas Cage, who for a time owned Midford Castle, near the tunnel's south entrance. Gradually the obstacles were surmounted and the tunnel brought back to life.

Opened in 1874, the tunnel is part of the Somerset and Dorset Joint Railway line, referred to as the S&D or, more unkindly, the Slow and Dirty or Slow and Doubtful. The line carried freight over the Mendips and, in the summer months, transported many thousands of holidaymakers to Bournemouth.

Building the tunnel beneath the high ground south of Bath was a major feat of engineering and when it opened the structure was the longest in the UK without intermediate ventilation. It was also very tight.

This led to tragedy in November 1929 when the driver and stoker of a goods train were overcome by smoke because their heavily laden train was moving so slowly. Once it had crested the last hill before Bath, it careered down the slope and crashed, killing the driver and two goods yard workers. There is talk of a ghost train sometimes going through the tunnel, which will cause an extra frisson for thrill-seekers visiting between 11pm and 5am when the lights are off.

Despite the tragedy and the unkind nicknames, the S&D was a favourite with railway enthusiasts and was mourned when it closed as part of the Beeching cuts in the 1960s.

Former railway workers will be at the opening, including ex-stoker John Sawyer, 66, who first travelled through the tunnel on the footplate aged 17. "The driver and fireman didn't tell me what to expect. It was a kind of initiation. They put soaking rags on their faces as they went into the tunnel. I didn't know what they were doing." He soon did when he was blasted with smoke, hot cinders and stream. "It was terrifying. It really frightened me. I must have gone through hundreds of times and I never got used to it."